With a 120,000 square ft facility under development, Hilltop Leaf is well on the way to becoming one of the largest medical cannabis production companies in the UK. Cannabis Health hears about its ground breaking new cultivation facility on the Scottish borders.

The UK currently has an estimated 1.4 million medical cannabis users, the majority of whom source their products from imports via private clinics, the illicit market or from plants grown at home.

Hilltop is aiming to change this. With its £15 million facility located in Dumfries, the company says it is on a mission to produce cannabis-based medical products, including full spectrum cannabinoid oils and Active Pharmaceutical Ingredients (APIs), that are suitable for specialist prescription in the UK.

The 120,000 square feet site will contain both a cultivation and extraction facility allowing the company to produce CBMPs that are grown, processed and manufactured in the UK, reducing the country’s reliance on imports.

“One of the biggest issues that we face in the UK is access to cannabis products, which I think is one of the reasons why the market has developed so slowly,” Hilltop CEO and co-founder, Hamish Clegg, tells Cannabis Health.

Having built relationships with clinics and distributors including Sapphire Medical Clinic, Lyphe Group and Health House, Hilltop says its cannabis medicines could be prescribed to UK patients by early 2022.

The site is built in an undisclosed, “secluded” area on the Scottish borders. Sheltered, free of pesticides and with an abundant clean water supply, the facility is situated in an ideal location for producing products that meet the EU’s rigorous GMP standards.

The site also has potential to harness renewable energy to power its operations. Behind it is a wind farm which the company intends to utilise alongside its own running water to create a fully carbon-neutral facility.

Having finished construction of the early shell, Hilltop is now progressing licence applications with both the Home Office and Medicines and Healthcare products Regulatory Agency (MHRA). It also plans to run a pilot in the coming months ahead of its application for a commercial cultivation licence.

“We can’t go into immediate all-out production, we need to solve the route to market first. This will enable us to define our products and select our genetic strains,” Clegg says.

“Our plan is to do something small; define our product with a pilot, which will be a modular grid within our facility.  The end product initially will be destroyed but the plan is that once we’ve defined our products, we will then be able to apply for a commercial cultivation license.”

The early stages of construction have been supported by £735,000 of Government funding from South of Scotland Enterprise, which Clegg says has “put the wind in its sails”.

Hilltop is now embarking on an external capital raise to fund the next stage of the project. The company has EIS Advanced Assurance from HMRC for its ongoing seed round which aims to raise between one and two million for the engineering, design and early construction of the site. This will be followed by series A equity funding round to finance site construction, QMS validation and staffing.

Hilltop Leaf was launched in 2019 by Clegg, a former investment banker, and agricultural experts, Neil and William Ewart.

Despite the lack of sun in Scotland, building a production site in the UK was important to Hamish and his team.

“I want to help build the UK medicinal cannabis industry and be one of the early movers in that,” Clegg says.

“We’re not in it for a quick buck. We’re investing hard cash, to develop infrastructure, develop relationships and develop supply chains, so that this is something to stay.

“We’re proud to be a British company and we want to build a British industry to that standard.” 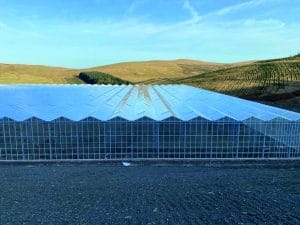 As owners of the land on which the new facility is being built, co-founders Neil and William Ewart have strong connections to the local area.

The south of Scotland is known to have higher-than-average rates of unemployment compared to the rest of the UK and as the region also faces a number of healthcare issues, Hilltop hopes that the site will support the local people and the economy.

Clegg added: “There’s a big unemployment problem in the south of Scotland and it has many healthcare demands in that part of the country that could be helped by introducing medicinal cannabis as a clinical option.

“We have tonnes of local support. The community, councillors and local MPs all wanted to build a medicinal cannabis business in the area that we are [based] in.

“We hope to be a big employer and someone who’s developing the local community in an environmentally friendly way.”

Starting with an early headcount of less than 20 with roles across security, administration and quality assurance, Hilltop eventually expects to employ upwards of 50 people. Local contractor Paul Davison has already been enlisted to help with civil works, and with support from locally-based firm Mark Seed Forest and Land Management on the initial planning application, the project has largely been welcomed by the local community, according to Clegg.

Alongside its plans to produce medical-grade cannabis medicines, Hilltop intends to import products to the UK. The company is working in partnership with MG Health, a medical cannabis cultivator and manufacturer based in Lesotho. The landlocked country bordering South Africa has become a hotspot in recent years for cannabis cultivation.

Hilltop aims to bring MG Health’s products – which are grown in the mountains two thousand metres above sea level – to the UK.

COO of MG Health, Francois Ferreira described the UK as an “under-devloped” compared to other European countries such as Germany where cannabis-based medicines are more widely available, but the company sees a “real need” for the medicine amongst British patients.

“When you see 1.4 million people going to the black market every day to self-medicate, you realise there is a massive need,” Ferreira says.

“At some point, it has got to give.

“If we are able to play a role in that, we’d like to. We’d like to be able to support the efforts of people campaigning for easier access, and we believe we have a product that can be unbelievably beneficial to people and to their lives in this country.”

The first product that Hilltop and MG Health plan to bring to the UK is a high-THC flower containing 20 percent THC, a range of terpenes and other cannabinoids.

“One of the reasons we want to partner with MG Health is because I’ve watched their journey in terms of quality assurance and quality plans and procedures,” Clegg adds.

“Everything from their growing facilities, the way the plants are treated and cared for, the consistency that is bought in; everything is done to good agricultural practice and EU GMP compliance.

“We’ve got the partner, we’ve got the quality products here, it’s got the certification and we are in the stages of planning the supply routes from Lesotho to the UK, to the secure storage facility and to eventually get to the point where we can show this to clinicians, so they can prescribe it to patients.”

With forecast revenues of £30.5 million per annum by 2023, Hilltop Leaf has ambitious plans to become one of the UK’s leading medical cannabis suppliers.

The company estimates that by 2023, the total addressable UK market will amount to £360 million and with the support of its patient access partners, Hilltop aims to take 15 percent market share.

According to Clegg, the company also plans to support the NHS develop the science surrounding medicinal cannabis.

“We have the desire to contribute to the scientific development of medicines to help people in this country,” Clegg says

“We feel that as a medicine, cannabis and cannabinoids are very under researched and under explored.

“The NHS hasn’t adopted cannabinoids as a widespread source of product for patients yet, but I think that’s developing.”